Yeah, this is a story about Pilgrims (this pilgrim, anyway) and Indians (Dene, to be specific), just not the typical one you hear on Thanksgiving.

Once, quite a few years ago, I spent Thanksgiving day with a group of young activists on the Navajo reservation. We were there working with an organization based out of Boulder Colorado, called the “Traditional Support Caravan”. The Caravan takes supplies (food, mostly) to traditional Navajo elders resisting being relocated from their ancestral lands.

Yeah, this is still happening.

The elders there are being pressured to relocate to make way for a coal mine that is slowly working its way toward them. And the coal mine’s purpose, of course, is to supply electricity to the western U.S. power grid.

While we were down there, a few of us had the honor of spending a week with an 80 year old widowed Navajo woman named Ida Clinton. She was half deaf, and blind in one eye. She lived in a small cabin, and lived mostly by herding sheep and gardening. She still cared for one of her daughters (now over 50 years old herself) who was born developmentally disabled. Her extended relatives came and visited her quite a few times while I was there (it seemed as though everyone around there was related to Ida — her “clan sisters” and “brothers”, as she called them). 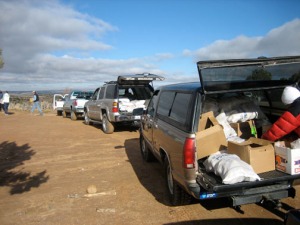 Ida had never signed a piece of paper in her life, and was adamant that she never would. She also didn’t have electricity at her place, and when asked about that, said she saw no need for it.

During our stay with Ida, she insisted on cooking for us, even though we had brought our own food. Over the week, I saw the very same flour and oil that we had given her being used to make the fry-bread that she served us.

She told us stories — rich & playful stories from her own experiences — stories that showed courage and resourcefulness in the face of adversity, and spoke to the solid connections she had to the land and her people.

We fixed a gate on her horse stable, chopped firewood, and shoveled some sheep manure.  (I was awarded an “honorary MD” by one of Ida’s nephews…the “MD” stood for Manure Digger.)  All in all, we felt really good about ourselves and what we had done to “help” this “poor” Navajo woman.

After driving the 12+ hours back to Denver (where I was living at the time), I found myself speeding into the suburbs just after dusk. Endless rows of apartments and suburban houses awaited me, and since it was now after thanksgiving, many of the houses had their Christmas lights out. I remember thinking how ironic those lights seemed now, knowing that the power to light them came from the coal that was destroying Ida’s home.

I remember thinking how Ida had no electricity in her cabin, and how she could see no need for it.

Then I walked into my suburban house and flicked on the light switch.

And a thought occurred to me: how many times do I need to flick that switch before I’ve fed more of my energy (in the form of money paying the electric bill) to that coal mine than I just fed to Ida (in the form of flour and oil and shoveled sheep-dung)?

And then a second thought occurred to me; was Ida a poor woman for her lack of electricity or was I a poor man for my need of it? The life I had seen Ida living (while it had its share of problems, and seemed hard in many ways) was intimately connected and rich with experience. Her daily relationships included contact with the fundamental necessities of life, her extended clan family, and the land. In many ways, Ida’s life had reminded me of the early childhood I had experienced on a homestead in rural Alaska.

I saw how Ida’s life had given her a resourcefulness, playfulness, and aliveness-of-spirit that I had rarely encountered in people half her age. The suburbs waiting for my return appeared stifling and lonely by contrast. The big city of Denver was a long ways from the homestead I had grown up on, and I knew my adult life now included very little that would have been important to Ida.

Since that day, I’ve slowly come to see that we are only in solidarity with native people when we re-connect with what it means to have our life and destiny linked with theirs.  What it means to live connected.  What it means to live with the land, and support our families directly from the land.  Simply put, I don’t think the world needs any more white helpers, no matter how right (or left) their politics may be. What the world needs is more people who know who they are the way Ida knows who she is.

I can’t speak for Ida, but I can say that Ida’s relationships and her way of relating (to adversity, to others, to the land) told me who she was.

It’s a shame that the Lakota phrase “all our relations” has become something of a new-age slogan.  Because it’s not a slogan, new age or otherwise.