An ancient escape from work.

“By working faithfully eight hours a day you may eventually get to be boss and work twelve hours a day.” — Robert Frost

For most of us, this cliche rings true. And in my experience, the exceptions tend to prove the rule. A tiny minority seem to get joy and fulfillment from their jobs, but such folks usually have jobs where most, if not all of society’s “dirty work” is left to others.  Like the primitivist writer Bob Black, I tend to define work as “forced labor”, so that makes perfect sense — after all, it’s the labor we don’t want to do ourselves that we’re tempted to force on others.

Even when folks love their jobs at first, the repetitive nature of institutionalized work tends to wear thin over time. Very few jobs keep people within the narrow zone between boredom and burnout over the long haul.

Believe it or not, the cliche that “work sucks” is even found in the oldest verses of the Bible. And interestingly enough, it’s tied to agriculture and listed as the main consequence of original sin. Just take a close look at Genesis 3:17-19 sometime.  Modern anthropologists have shed some light on what the Genesis story is talking about, by confirming that the experience of “working for the man” developed within agricultural societies over the last few thousand years.

So what to do about it?

Since the beginning of work, people have tried to escape from work.

The solution for those with power has historically been to make others work for them. In fact, anthropologists also tell us that the process of enslaving others is universal in “civilized” societies (i.e. societies that have both farms and cities).  This has been true of every urban/farming culture from Greece and Rome through India and China to the Aztecs and the Maya. And in the process of creating our own modern world, slavery got to the point where Euro-American economies from the 16th through the 19th century were completely dependent on it for their very survival.

But of course, such extreme levels of slavery have been outlawed now that the industrial economy has developed into it’s more modern form.

Recently, an advocate of industrial technology shed some light on why that happened, when he made the argument that our first-world petroleum-based technological lifestyle gives each of us the equivalent of “400 virtual slaves working for us 24/7″. Immediately after, he asked the rhetorical question “who would want to give that up?”

So there is our escape from the curse of forced labor. Now we don’t enslave our fellow humans, we can build “slaves” in the form of machines which get their energy from petroleum. Seems like a wonderful solution to the problem of work…everybody wins, right?

Well, maybe not everybody.

And indigenous people are being consumed in various ways to bring us those virtual slaves…never mind the wars in the middle east, terrorism, dictatorships, etc., that are all intimately linked with global oil extraction.

And from the recent spill in the Gulf of Mexico to development of Canadian tar sands, the land we depend on and call home is being polluted in ways never seen before.

And if all that weren’t bad enough, it turns out oil is a finite, non-renewable resource that is actually running out pretty darn quick.  So ultimately, it’s going to leave us high and dry.

Beyond all that, the most incredible thing (in my mind, at least) is that, in spite of the virtual toil of those 400 petroleum “slaves”, most of us still work a whole hell of a lot.

Think about it.  Has the industrial world freed you from working?  Does it feel like you have 400+ slaves at your beck and call 24/7?

In fact, most of us work a good bit more than our pre-historical “primitive” ancestors!

So it really does appear that we are caught in a rat-race — stuck as much as if we were hamsters on a wheel. What can we do? How can we escape the curse of work?

Marshall Sahlins writes that there are two roads to affluence: produce much, or desire little. The flip side of the “produce much” road implies a certain amount of “desiring much”. We see this in our society, where the whole economy is centered around producing much and an entire industry (the advertising industry) has grown up around helping us desire much.  We see this expressed in the words of the fictional character Gordon Gekko from the movie Wall Street: “Greed” he tells us, “is good.”

The flip side of desiring little, however, is that one then finds sharing to be easy. This is the aboriginal way to affluence: desire little, share much. Anthropologists and other visitors to reasonably intact nomadic hunter-gatherer societies have found this way to be nearly universal among such ancient cultures. They have also found slavery to be generally absent as well. For myself, I observed this way of being as still common among the Walpiri Aboriginal people of central Australia during a visit to the outback a few years ago. 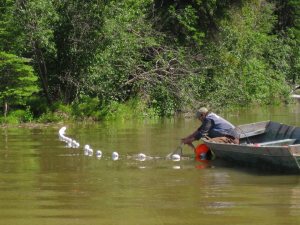 Some have called this way the “gift economy”.

And surprisingly, though few American Christians might realize it, this way appears central to Jesus’ cure for that nasty “fall” noted in the book of Genesis.  Jesus is quoted as saying: “Look at the birds of the air; they do not sow or reap or store away in barns, and yet your heavenly Father feeds them.” And “The man with two tunics should share with him who has none, and the one who has food should do the same.”

After all, there is a saying: “The worst day fishing is still better than the best day working.”

A few folks I know of have already escaped the job trap.

What have we got to lose but our slaves?